We have been developing our awareness of sounds and rhythms using our whole bodies. We have been moving around in lots of different ways, making a range of sounds with our bodies and have been trying our best to remember a few simple sequences.

Listen to the Music

We have experimented with making lots of different sounds using our bodies and tried to copy each other. One person used an instrument to make a beat and everyone else tried to follow their beat, making a sound using their bodies at the same time. We stomped, clapped, patted our knees and did lots of other noisy movements.

Early one morning the children were all fast asleep, when suddenly… There was a noise from the house next door! The children woke up. They took turns to guess what could be making the noise and then kindly asked their noisy neighbour to be quiet. “Noisy neighbour, please be quiet! We are trying to sleep!” The children got woken up lots of times in the night but had lots of fun trying to guess what could be making all the noise.

The children love the suspense in this activity. Start off slowly rolling your arms while slowly saying “Roly Poly ever so slowly…” Gradually or suddenly increase the speed, “Roly Poly faster…” As the movements become faster say the rhyme faster. Sometimes we stop and giggle while we wait until it is time to move again. The children also made suggestions of different movements, for example “Stomp your feet ever so slowly…” 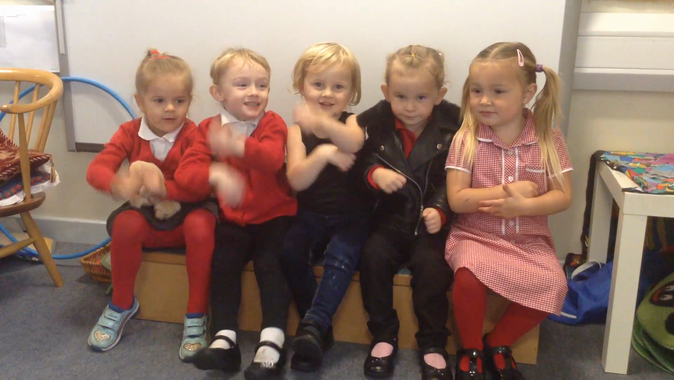